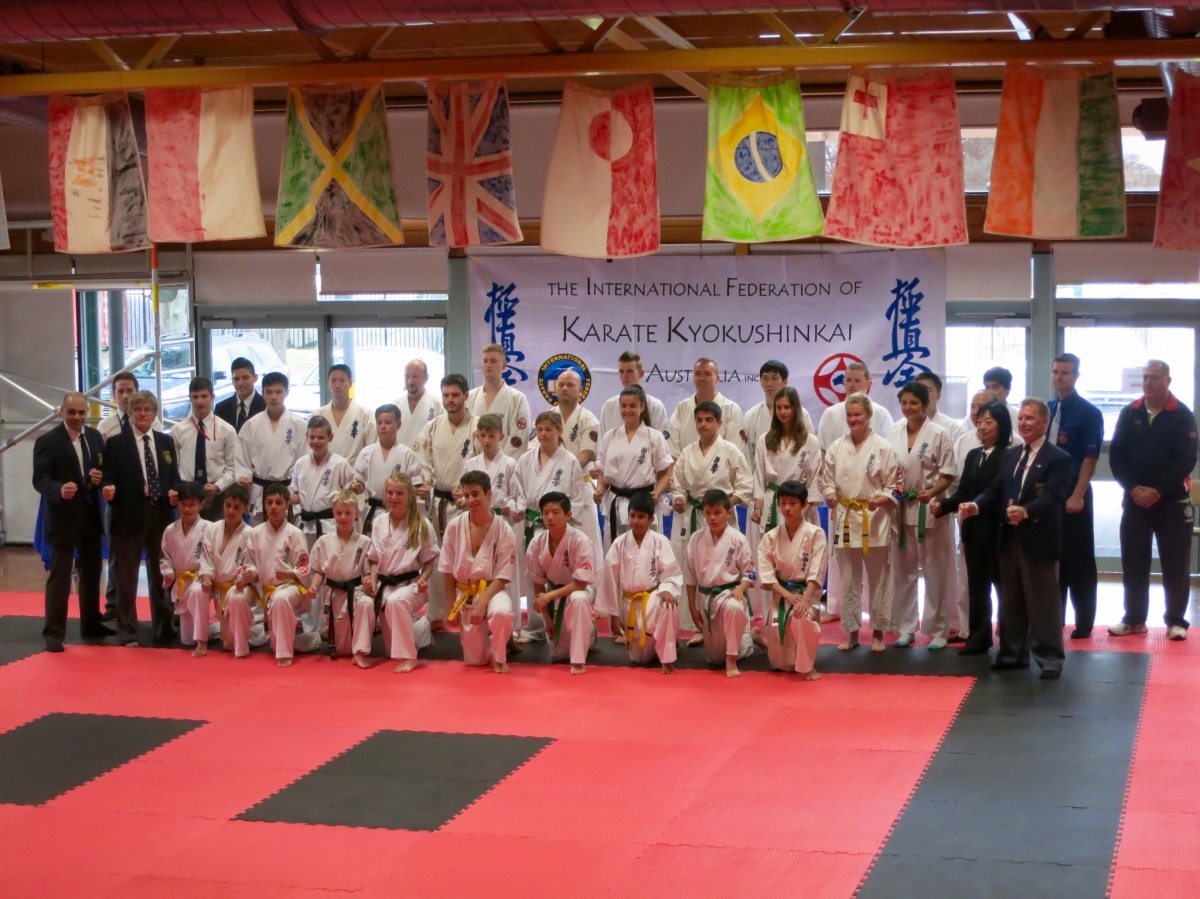 KIMAA students from Turramurra and Annangrove dojos entered the International Federation of Karate Kyokushinkai Australia tournament on Sunday September 6. The tournament was hosted by Shihan Doug Turnbull (6th Dan) and Sensei Jenny Fuller (3rd Dan) of the IFKKA. The competitors enjoyed great success, with most students walking away with placements at the end of the day.

Competing in the full-contact Kyokushin tournament were:

Round 1 got underway promptly at 10 am. Aaryan Sahukhan and James Parasyn in the ‘Boys 11-13 years under 40kg’ division were up first. It was Aaryan’s first tournament. He showed great spirit, but his more experienced opponent won the match. James used his high kicks to keep his opponent away, scoring points quickly and progressing to Round 2.

Next up was the ‘Men’s Open Middle Weight’ division. Sempai Alex won his fight with aggression and continuous movement. He moved to Round 2, where Sempai Ben and Sempai Don were waiting after both having a bye. The younger years were back to the fighting mats again.

Bernard Wilson, ‘Boys 11-13 years 40-45kg’, held his own against a young black belt from another dojo, but the more advanced fighter won the bout. Next was Kasra Parsanejad, ‘Boys 11-13 years over 45kg’. Kasra had a great first fight, using his height and long legs to overpower his opponent with numerous head kicks.

Andy Kuo of ‘Men’s Novice Heavy Weight’ followed next. Andy copped some heavy hits from his opponent but kept pushing through, winning the round, after two extensions, with gusto. Jasper Choi, ‘Boys 14-15 years 50-57kg’, fought after Andy. Jasper displayed great energy, narrowly losing but still showing the right aggression and pace that a young Kyokushin fighter should have.

Round 2 was the round of extensions and determination. James Parasyn fought hard, narrowly losing to his black belt opponent. His fight went to one extension before the judges could determine a winner, however.

Sempai Don entered Round 2 after his bye, quickly overpowering his opponent. Don used his strong leg techniques and relentless chasing to out-muscle his opponent, earning his place in the Finals for the ‘Men’s Open Middle Weight’ division.

After his win in Round 1, Sempai Alex came up against Sempai Ben, who’d had a bye. The two exchanged many blows: Ben’s trademark strong side and thigh kicks against Alex’s punching barrage and uppercuts. It was a close fight, but Ben’s blocking and fast leg techniques ultimately prevailed. After two exhausting two-minute extensions, the judges finally declared a winner, giving the fight to Sempai Ben.

Kasra fronted up to his second fight in the ‘Boys 11-13 years over 45kg’ division. Kasra again used his height and kicks techniques to great effectiveness, giving him another win.

The final round of fights saw the placement play-offs and finals. Sempai Alex was up first against the opponent Sempai Don and beaten in Round 2. Alex used his aggression and strength to overpower his opponent. The referee awarded Alex the match after he scored two waza-ari, securing Alex as Third Place in the ‘Men’s Open Middle Weight’ division.

Elia Parsanejad had her first fight of the day in the final of the ‘Girls 14-15 years over 55kg’ division. Elia had energy and aggression, dominating much of the fight. However, despite her grit and resilience, her opponent won the bout due to scoring waza-ari from well-timed techniques.

Following Elia’s fight was the big event, the final for the ‘Men’s Open Middle Weight’ between Sempai Ben and Sempai Don. Sempai Ben started the fight a bit more tired than Sempai Don after his longer session in Round 2, but both competitors showed nothing but strong resolve and Kyokushin fighting spirit. The two went punch-for-punch, leading to a two-minute extension. Both sides give it their all in the extension, but ultimately Sempai Don’s leg techniques had more power. The fight went to Sempai Don.

The ‘Boys 14-15 years 50-57kg’ division continued in a round robin. Christian Girdham and Jasper Choi both had losses in this division, but faced each other as part of the play-offs. Jasper moved around a lot but Christian’s height gave him the advantage he needed, taking the win. (A video of this fight is not available.)

KIMAA’s last fight in the tournament was Andy Kuo in the ‘Men’s Novice Heavy Weight’. It was a long, hard fight with an extension. Andy took a hit to the groin and the jaw. His opponent won the fight, despite the penalty against him, but Andy couldn’t have done KIMAA any prouder.

Most of the fighters won placements at the end of the day. These included:

Congratulations to everyone involved. Both first-time fighters and the more experienced combatants all displayed great determination and attitude, regardless of the strength and experience of their opponents. Shihan Lipman was very proud of all involved. Having KIMAA take so many placements, including the top three of the ‘Men’s Open Middle Weight’, was an extra special reward for all the hard effort put in by students and instructors alike.

Thanks again to Shihan Lipman, Shihan Cunningham and Sensei James for the coaching support, both on the day and in all the months of training prior.

KIMAA’s next big event will be the October/November Seminar & Grading.