On the weekend of Saturday 14-15 September, practitioners from Hanshi Howard Lipman’s KIMAA dojos across Australia spent Saturday and Sunday in a training seminar.

The weekend focussed on standardisation of technique and instructing, Kata and Bunkai, Kumite and Kobudo in small groups, so all members could train appropriate to their grade level and other requirements. 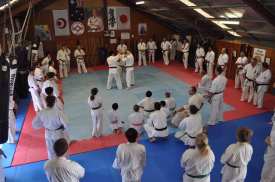 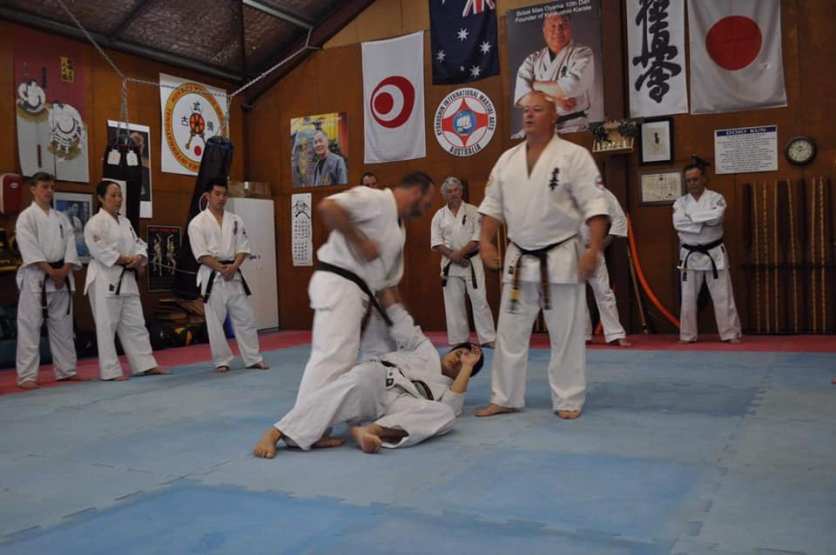 In the sparring component of the weekend, students came together to engage in kumite with students of varying grade and size, and from different dojos. The goal from the sparring session was to maintain movement and keep nimble. Guards were encouraged for this activity. Different grades were paired together from the various KIMAA dojos. The bouts were relatively short to enable the participants to experience kumite against a number of different people.

At the end of the first day training of the seminar, the KIMAA dojo operators made a presentation to Hanshi Howard Lipman. In recognition of the immense perseverance and determination Hanshi has demonstrated in maintaining his commitment to martial arts and Kyokushin over such a long period of 50 years, Hanshi was awarded a plaque as well as a book of memories. 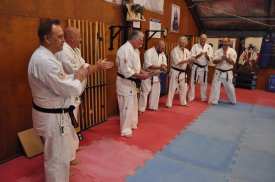 All of the KIMAA students appreciate and thank Hanshi for the continual patience and support that he has shown them over those years.

Saturday night was spent at Shihan Rick’s for a roast dinner and drinks. A special mention to both Sempai Stephen Runge for contributing a delicious roast pork and Sensei Ian Holdaway, who cooked our BBQ lunches.

A lot was learned by all who attended and it is paramount that what was learned is continuously trained, embedded and refined.

It was a great weekend and another example of how well all the KIMAA dojos bond and support one another and we are looking forward to all catching up at the senior grading in December.

Congratulations to Rhoy Tarnate who achieved third place in the Men’s 5th kyu and below heavyweight division. It was his first experience of full contact tournament fighting. Hope to see him compete at many more.

Students from Lismore Dojo competed Round 4 of the National All Styles on Sunday August 4th. 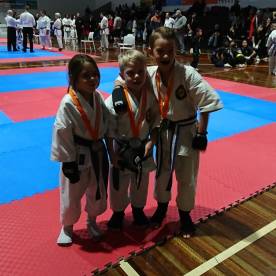 Congratulations to all for their efforts and Akayla for her placement.

The KIMAA Kyokushin Karate senior grading was in held in Sydney’s Turramurra Dojo on Saturday 29th June. It was a gruelling five hour session run by Hanshi Howard Lipman. 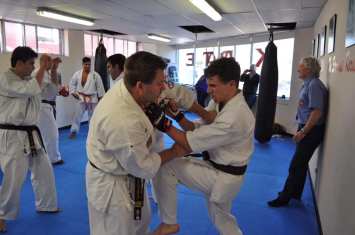 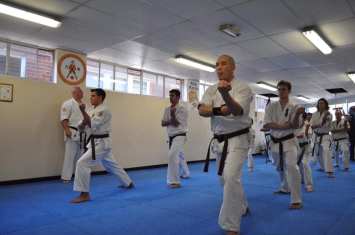 Basics in zenkutsu dachi during the grading 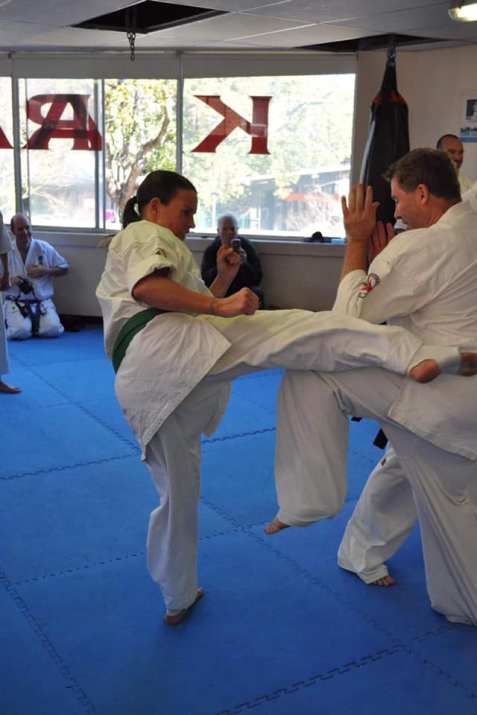 Congratulations to Ben Brady from Ballina Dojo, who successfully completed his Shodan grade!

A special mention to kids Peter Zhu and Yue Leon Chia from Turramurra who participated in the senior grading, and performed with discipline and focus during the entire 5 hours.

Congratulations to all participants! Osu.

The following day, Kobudo practitioners from Sydney and Young trained together at Annangrove Dojo in a class taken by Shihan Rick Cunningham. Sensei David Craigie from Young remarked, “Thanks everyone for your patience and instruction once again, we always enjoy our morning Kobudo with all.”

The KIMAA Far North Coast NSW dojos at Ballina and Lismore hosted a winter seminar. The guest instructor for the weekend was Shihan Rick Cunningham from Sydney.

On Saturday June 15th, the seminar was at Ballina. The focus of the day was Kyokushin Karate, in particular self-defence applications and kata bunkai. 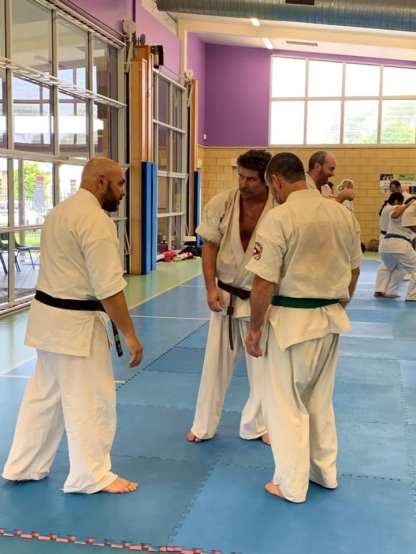 The seminar continued on the Sunday at Lismore Dojo, and included a special Little Lions class. 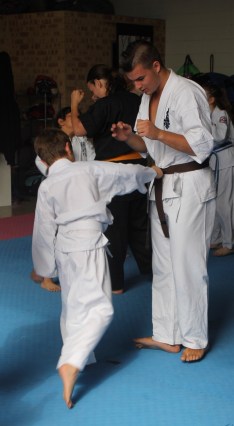 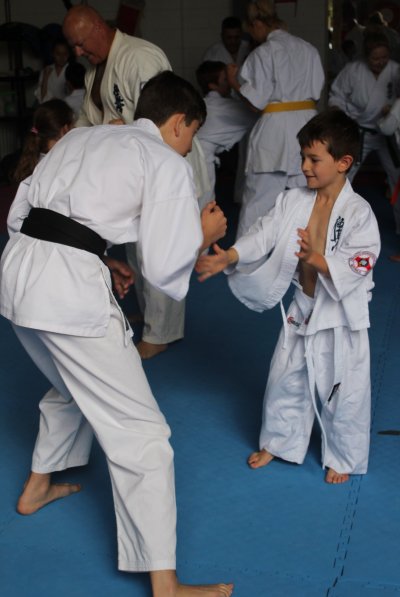 A Kobudo session for beginners and experienced students alike was also held on the Sunday. 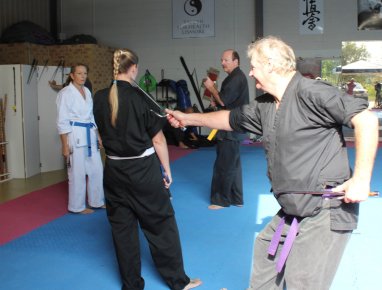 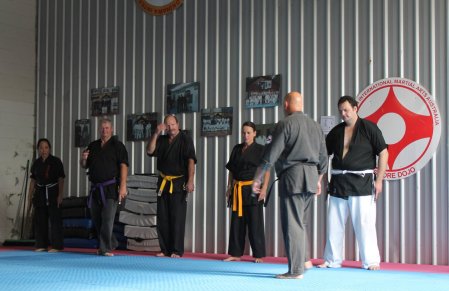 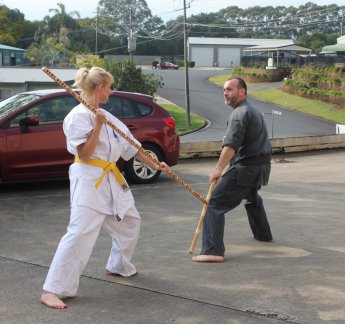 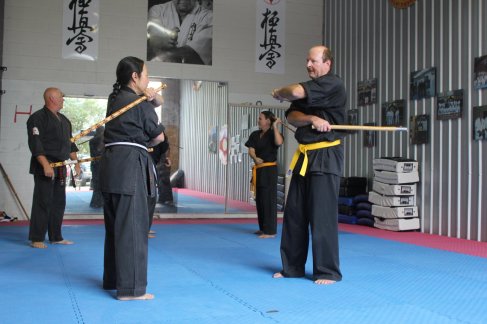 Thanks go to all seniors for assisting, Sensei Mark McFadden and Sensei Jon Ellis for hosting, and to Shihan Rick Cunningham for making the trip.

Sensei Rob commenced these classes as he believes in the power of martial arts to make a difference. He has had a few kids on the spectrum pass through his dojo over the years, and they were all stand outs. “Every single one of them.” Sensei Rob was inspired to promote and dedicate classes for these children. He ended up with 8 kids in the 8-week trial period at the Pine Rivers PCYC.

Some of the children in the classes would not even speak, yet every student was committing to a loud kiai after only one class. They were all enthusiastic and took to Sensei Rob without much effort. From there, everything flowed into a very relaxing atmosphere. They handled the etiquette and discipline with aplomb, as a clear structure often does for children on the spectrum.

The classes comprise everything from basic technique and fitness to studying the movements of the first forms (kata), and even some self-defence applications.

Sensei Rob will resume these classes in the very near future. All enquiries should be directed to Sensei at the contact details on the Brisbane Dojo page. On Sunday May 5th 2019, a Kobudo grading was held at Annangrove Dojo.

Special mention also goes to Sensei James Sidwell for breaking his Eku during the grading, in a display of raw power and great technique.