This class continued on from the Kyokushin black belt sessions last year in August and October. They are now scheduled shortly before the twice-yearly KIMAA seminars, designed to both consolidate knowledge among the seniors to ensure their students’ preparation is correct, as well as being advanced training for any seniors attempting a grading.

Three katas were practised: Saiha, Seienchin and Okinawan Seipai. Students then worked in pairs to go through the bunkai.

There were some sore bodies at the end of class from all the throws and takedowns – not to mention the wrist locks – but it was a successful class with a lot of focused content.

Senior Kobudo students fronted up to Annangrove Dojo the next morning for training, again with Sensei Mark and Sensei Jon in attendance. The Kobudo black belts revised Sakugawa No Kon (Bo), Arnis stick drill, Chatanyara No Sai (Sai) and Kudaka No Jo (Jo). 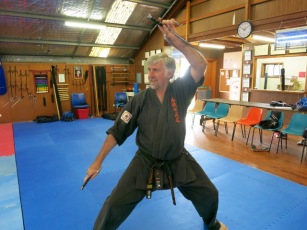 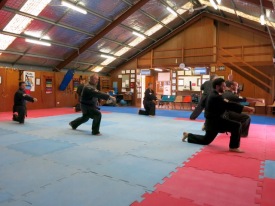