Sensei Ben Ng and Sempai Alex Lloyd competed in the Men’s Open Middle Weight division. Sensei Ben moved around his opponent well and got some good kicks in, but the judges favoured the other fighter’s aggression and control. Sempai Alex fended off a barrage of fast head kicks from his opponent, but ultimately lost the bout to well-placed roundhouse kicks on his ribs and thigh.

Sempai Josh Darley fought in the Male 10-12 Lightweight Padded division. Sempai Josh used his calm, controlled techniques to keep his first two opponents moving all over the matts. He made the semi-finals of his division and placed Equal Third. It was a valiant effort by the young Shodan. 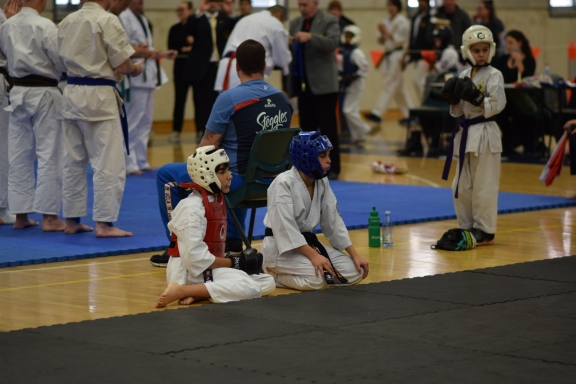 Sempai Josh waits for his fight 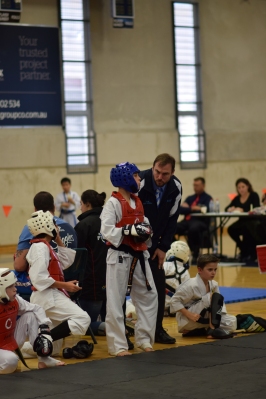 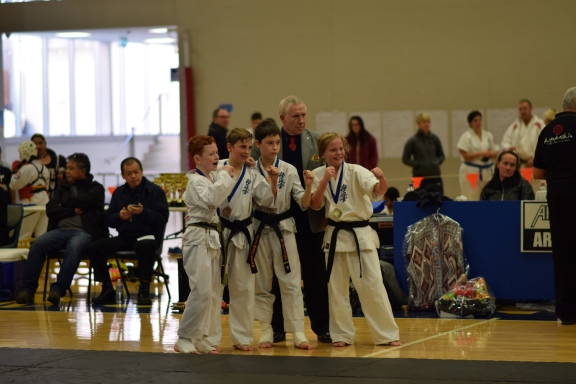 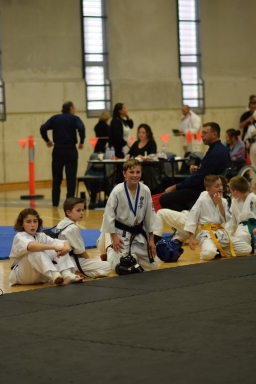 Jasper Choi, fighting in the Male 16 & 17 Lightweight division, went hard and never gave up, despite some hard knocks. Turramurra’s 9th Kyu fighter Thomas Crossman, competing in the Male 5th Kyu and Under Lightweight group, entered his first ever tournament with enthusiasm and guts, determined to keep going despite fighting a much more experienced 5th Kyu. 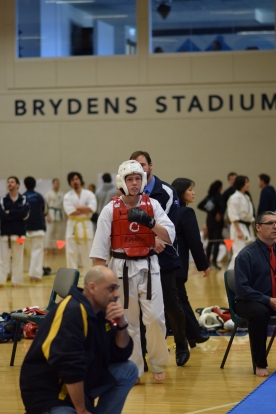 Eric Wright of Annangrove Dojo fought fantastically in his first tournament. He fought up a division, in the Male 16 & 17 Lightweight division, and made it through to the final. He finished second in a close fight. Congratulations on your hard work, Eric!

Elia Parsanejad of Turramurra Dojo faced up to her first tournament in a while, competing in the Female 16 & 17 division. Elia remained calm and used a relentless attack and forward momentum to control her fights, with some good kicks thrown in. Elia did KIMAA proud and took First Place in the division. Congratulations, Elia!

A great effort was made by all who competed, both in the lead-up to the tournament and on the day. Congratulations go especially to Elia, Eric and Sempai Josh for their placements.

Thanks go to Shihan Howard Lipman, Shihan Rick Cunningham, Sensei Idir Bahamid and Sensei James Sidwell for the coaching, and all those who came to support the competitors on the day. Sempai Jonathan Lee filmed the fights and provided most of the photography.